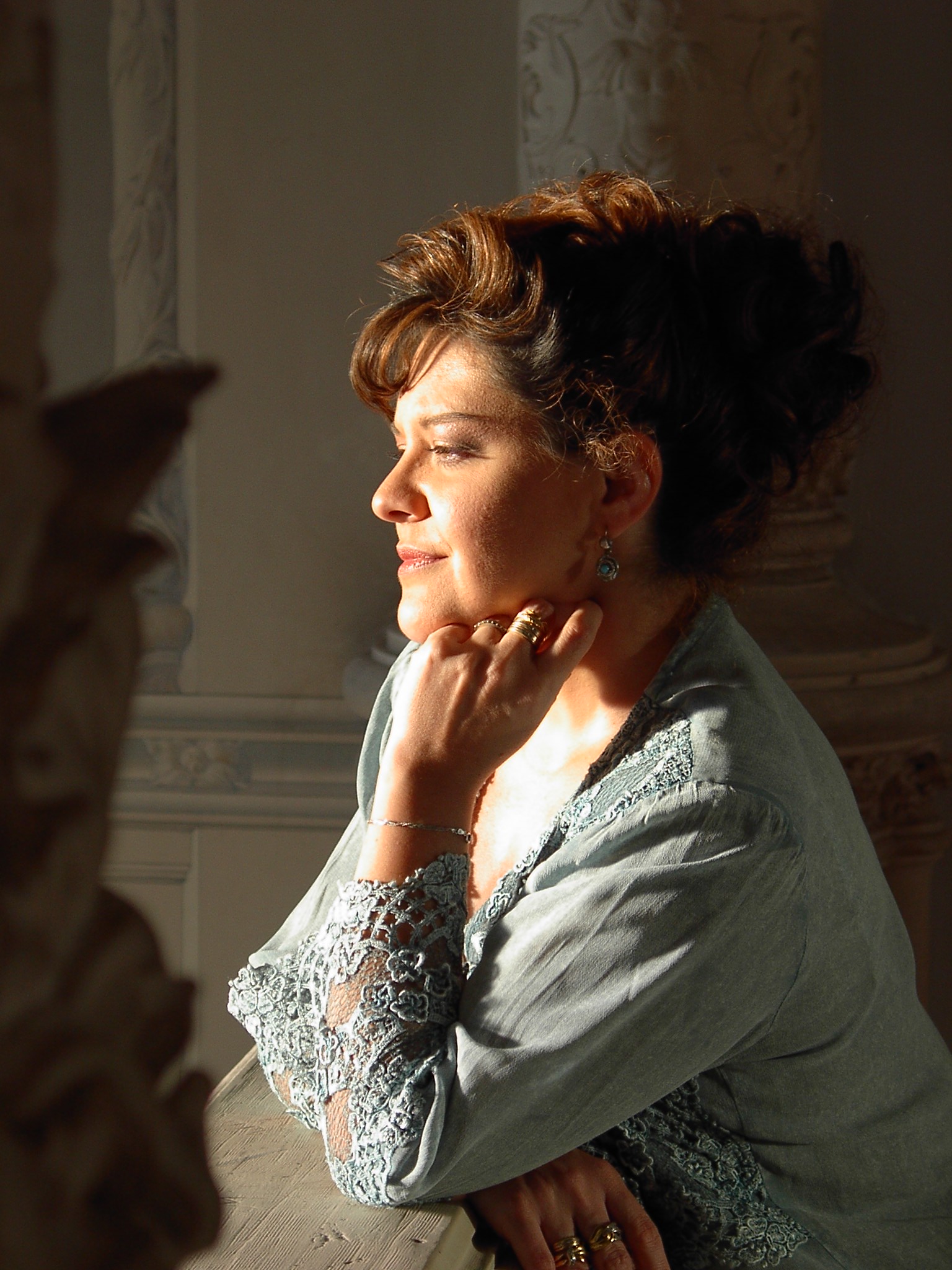 Born in Turin, both her parents were singers. She began studying singing under the guidance of her father, while following the main course in piano at Turin’s Conservatory. She took part in numerous international competitions, including the “Aureliano Pertile” which she won in 1983, as well as the “Viotti” and the “Maria Callas”. In 1987, she was awarded the international “Maschera d’argento” prize (previously awarded to Pavarotti, Cappuccilli, Scotto etc) and in 1996 the “Mascagni d’oro” prize. After having taken part, as a child, in various works such as Giordano’s Mese Mariano, Il diavolo in giardino by Mannino, she made her stage debut in Genoa, when she was only 16, in Pelleas et Melisande, directed by Menotti, followed by Gilda in Rigoletto in Florence. She had to play again Pelleas in the famous Antoine Vitez production conducted by Caludio Abbado at La Scala, Vienna and Covent Garden that was also recorded by Deutsche Grammophone. At the age of 19, she made her debut at La Scala in the role of Clelia in Lucio Silla directed by Patrice Chereau. She then returned at La Scala regularly every year as Micaela in Carmen conducted by Claudio Abbado in the famous Piero Faggioni’s production and other operas. In 1985 she played Rosina in Paisiello’s Barbiere staged, at the Teatro Petruzzelli in Bari, by Maurizio Scaparro and then taken in tour in Norway, Russia, Spain and Spoleto. She then played Adina in Sonnambula and Oscar in Ballo in maschera both conducted by Gianandrea Gavazzeni at La Scala in 1986. In Florence she sang Dirce in “Medea” directed by Liliana Cavani Since then her career has taken her to the worlds’s most important theatres – Vienna, Munich, Bonn, Chicago, London Hamburg, Zurich, Bologna Venice etc. She returned to La Scala, with Muti as conductor, for Susanna in Nozze di Figaro and Zerlina in Don Giovanni both produced by Strehler.

She has worked with conductors as Abbado, Muti, Gavazzeni, von Karajan, Bartoletti, Sawallish, Cambreling, Sinopoli, Conlon, Santi, Lombard, Oren, Campanella, Viotti, Soudant, Weikert, Soustrot and directors as Chereau, Vitez, Strehler, Olmi, Faggioni, Cavani, De Simone, Pasqual, Kokkos, Cox, Joel, De Ana, Del Monaco, Miller, D’Anna.
She has recorded various cd with Abbado, Muti, Jaervi, Lombard, Colusso and all Carissimi’s oratorium.
Between last roles are Lucieta in “I quattro rusteghi” at Parma, Nannetta at Charleston and Seville, Liù in Cagliari, Adinam ”Elisir d’amore” in Catania.
She sang Susanna in Nozze di Figaro in Bologna, Parma, Reggio Emilia, Ravenna, Roma then Nannetta in Falstaff in Catania, Seville, Palermo, Verona, Nice, Charleston, followed by Micaela in Carmen in Venice, Toulouse, Santiago del Chile conducted by Alain Lombard. After having debuted Mimì in Boheme in the open air arena of Avenche, she has sang the same role in Puccini Festival in Torre del lago in luly 1999, “Turandot” in Santander and Cordoba, “Carmen” in Santiago Cile and Bellinzona.
She has sang again Susanna in Nozze di Figaro in Rom, then Rigoletto and Fidelio in Catania, Liù in Turandot conducted by Alain Lombard in Seville, then in the Festival Santander and in Cordoba and in the arena of Avenche where she also sang Rosina in Rossini’s Barbiere. With Alain Lombard she has recorded Donna Anna in Don Giovanni. She took part to a world premiere of Donizetti’s Alahor in Granata in Seville and in Palermo. January 1999 she sang Giulietta in Capuleti e Montecchi in Lecce, and then in Catania. Always in Catania she sang Pamina in Zauberfloete directed by Werner Herzog. In October 1999 she sang Susanna in a new production of Nozze di Figaro in Seville, then Zerlina in the Mozart Festival in La Coruña, Orphée aux infer á Turin and Orfeo ed Euridice in Jesi.
She just sung Falstaff in Nice and Gianni Schicchi in Bilbao and Nice, then she will sing Pamina Zauberfloete in Avenche ans Liú in Turandot in Lucca and Catania
Until now she has debuted 62 roles in operas plus various concerts and barock repertoire. Between the most performed roles, are Nannetta, Susanna, Oscar, Zerlina, Gilda, Liu, Micaela.
She has recorded various operas and concerts and she combines opera with an intensive program of concerts, with particular emphasis on the baroque repertoire.
In 2008 she held a master on the Italian singing at the opera house in Yerevan in Armenia.
She has been a member of the jury in various singing competitions such as the international “Jaime Aragall”competition in Spain, the “Vincenzo Bellini” Competition etc.
She has been Professor of singing at the Politecnico internazionale “Scientia et ars “in Vibo Valentia. Since 2005 she was voice teacher in the Conservatory “V. Belllini” of Palermo and currently a professor at the Conservatory “A. Scontrino” in Trapani.
She has been a guest professor at the Conservatory in Tianjin and at Beijing University and she has hold various master classes in China Universities and conservatories such as Xuchang University, Zhengzhou University, and at the Beijing University Accademy of Opera in China.

We use cookies to ensure that we give you the best experience on our website. If you continue to use this site we will assume that you are happy with it.OkRead more